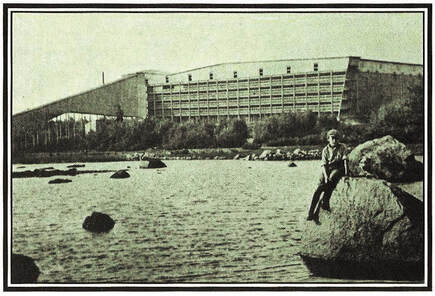 Lake Massapoag is a headwater of the Neponset River watershed.  In pre-colonial times, the water level was higher in Lake Massapoag: wetlands beside the lake extended all the way to where South Main Street is today. At this higher water level, the lake also drained south through the Canoe River, and herring migrated upstream all the way from Narragansett Bay to Lake Massapoag to spawn.

In colonial times the outflow from Lake Massapoag was redirected north down Massapoag Brook to power a series of mills. Paul Revere acquired the water rights to Lake Massapoag to power his mill in Canton. He charged the other mill owners along Massapoag Brook a fee to use his water to power their mills. In summer the lake served as a reservoir to keep the mills running even during dry spells.
​In the 18th century, workers deepened the outlet of the lake to draw the water down in order to extract bog iron for the smelting industry.  Lake Massapoag was the site of a large 19th-century ice business, with an enormous wooden icehouse (left) at the eastern end of the lake.
​
Great Cedar Swamp
The Sharon Great Cedar Swamp (GCS) lies to the west of Lake Massapoag, and is vital to the health and sustainability of Lake Massapoag and Sharon's drinking water. Precipitation falling within this area percolates through its thick black organic soils, which act as physical, biological, and chemical filters, removing pollutants from rain water. During storm events the GCS acts as a large basin that stores water and moderates flooding. This water is then gradually released over a long period of time, mitigating the effects of summer droughts. Groundwater mounded beneath the GCS gradually flows from the swamp in all directions, and discharges as freshwater springs into the bottom of Lake Massapoag, thereby cooling the lake and maintaining its water quality for bathing, boating, and fishing.​  You can find out more here:  Restoration and Revitalization of the Sharon Great Cedar Swamp, Progress Report, June 2012

​History of Lake Massapoag: YouTube Video, Sharon Local History Channel, February 2021. In
one year this video had over 2,000 views.

Lake Massapoag Depth Chart, a resource for fishing and boating. Scroll in to read depth markings. See another version here.

Follow the path of a raindrop from Sharon to the ocean. ​